Get our Teams appSign up
Login 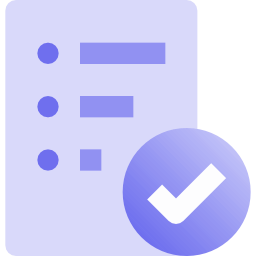 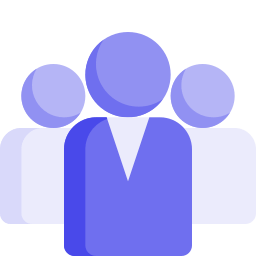 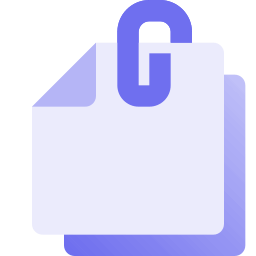 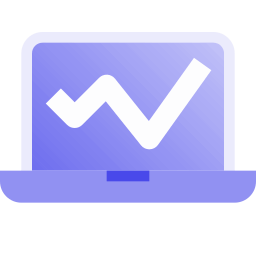 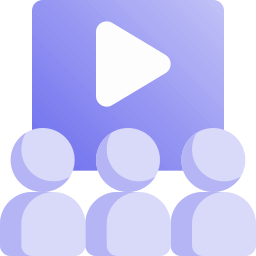 Book a demo
Our team is happy to help you

Core
Key cyber security ingredients that belong to all other frameworks

NIST (coming up)
Framework for cyber risk management and treatment

All frameworks
Show all current and upcoming frameworks 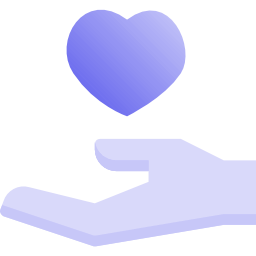 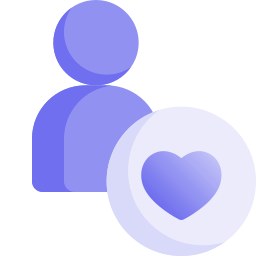 Team
We're here to support you

Ensure cyber security and privacy are in the wanted level, whether it's meeting customer promises, showing legal compliance or reaching certification.

Sign up now - it's free
Works on MS Teams 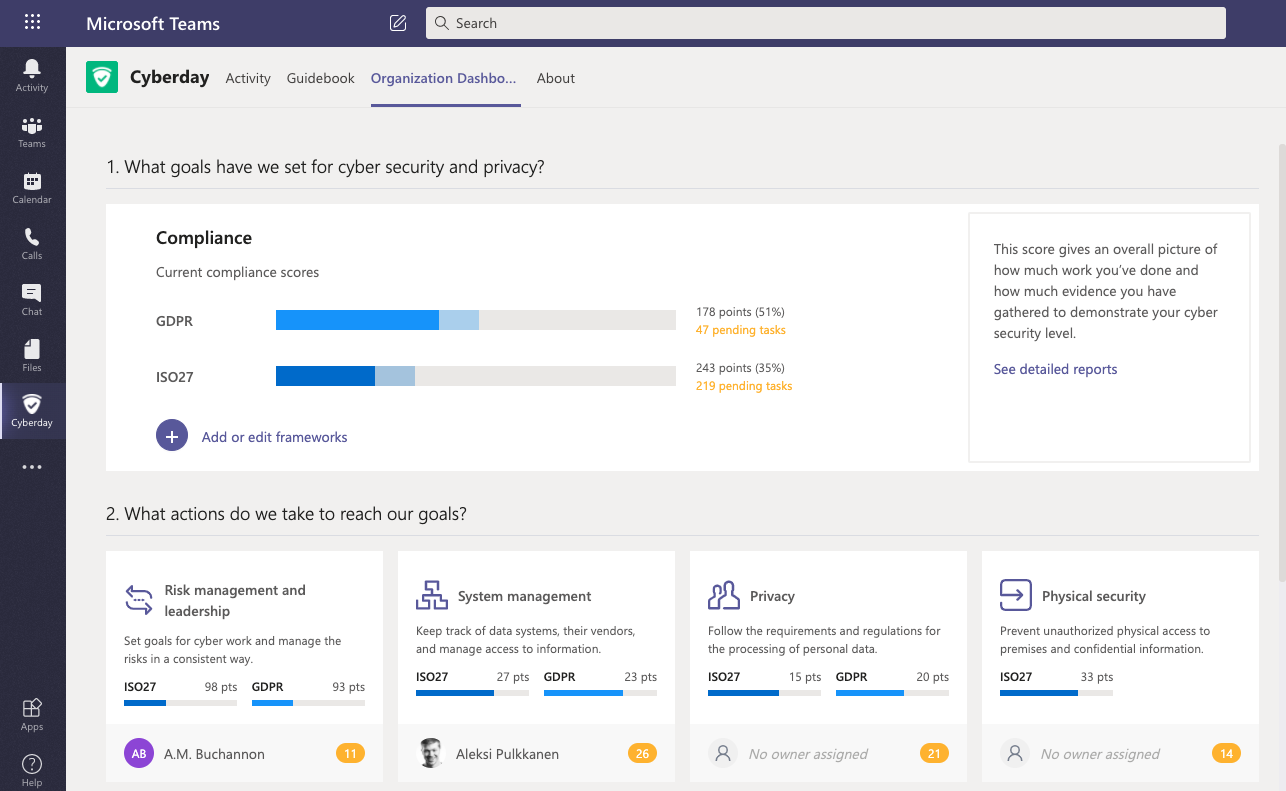 Core, GDPR or ISO27001? Do only the obligatory things or pursue competive advantage.

Find ready-made templates from reporting library, which you can fill with one click.

We serve organizations of all sized, from hospitals to small companies, municipalities and associations.
250+ iloista asiakasta - lue lisää

Updates from our team

Our Teams app passed the latest Microsoft tests and is now available from the Teams app store. This article reviews the benefits and deployment of Cyberday's Teams app.

We released an update to Cyberday documentation. The goal was to streamline documentation, highlight the most important things and significantly reduce the amount of separately documented items. 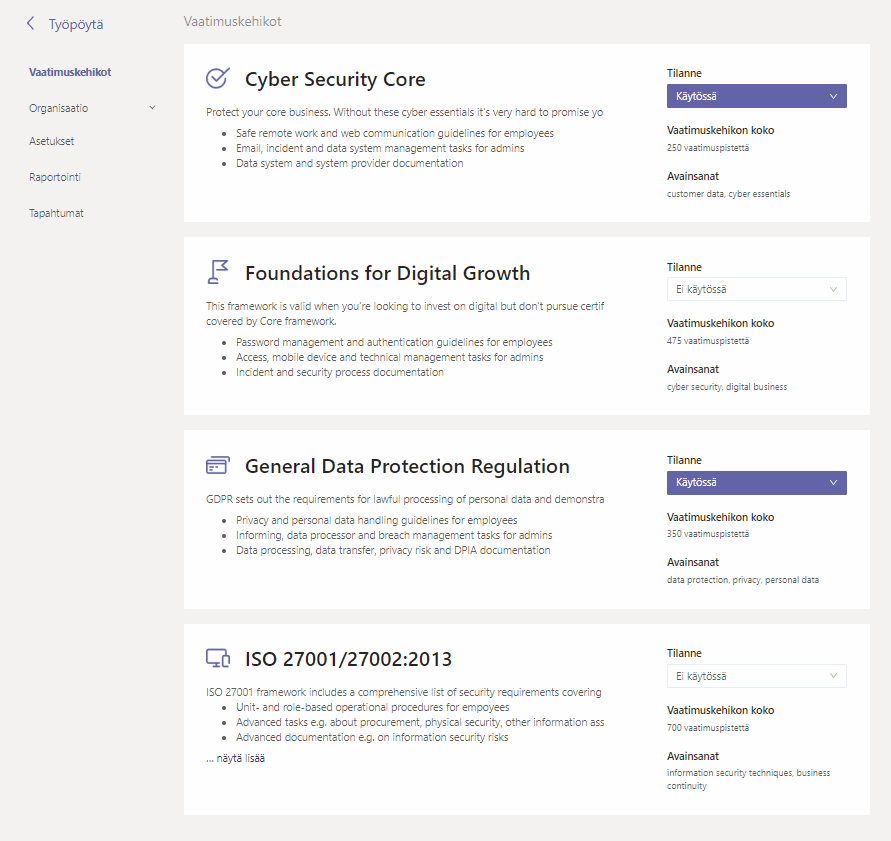 Structure in CyberDay compiles of 12 cyber themes. When you choose your framework, each theme is filled with content that is required to be executed. From the dashboard you can see how requirements start to get filled.

Make sure tasks get done and can be demonstrated

Task lists include the core things of cyber security. Decide, which tasks are done and who's responsible. Tasks are listed by connection to frameworks so you will see the most important tasks on top of the list. 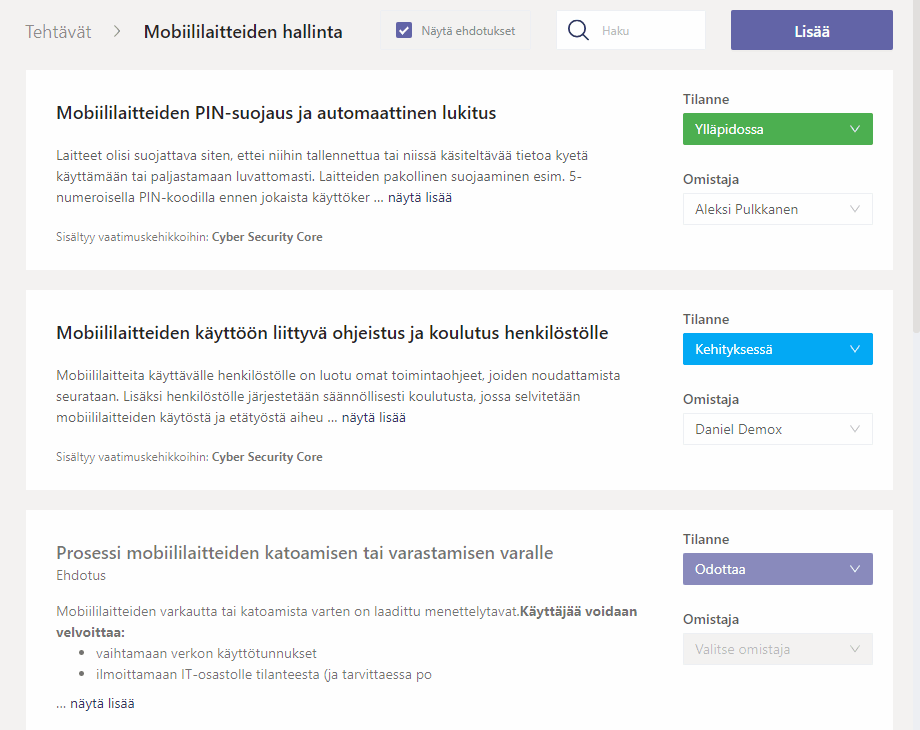 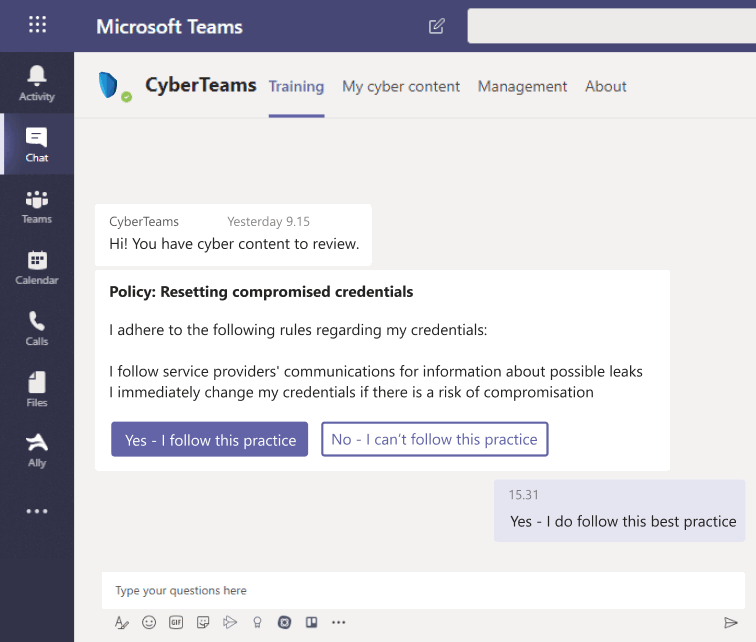 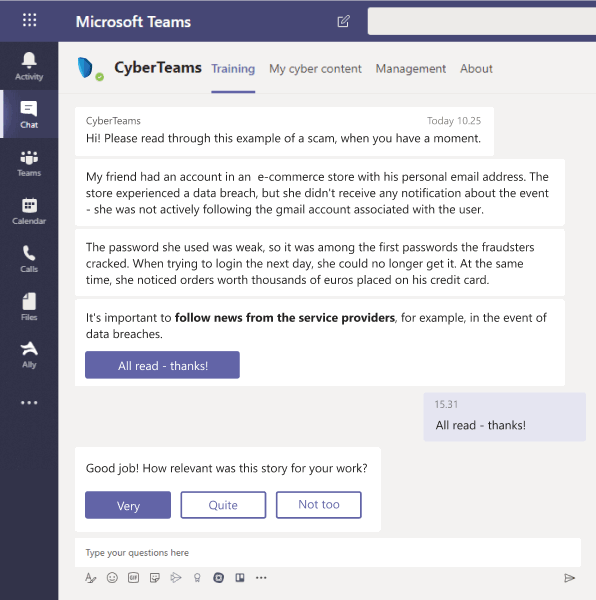 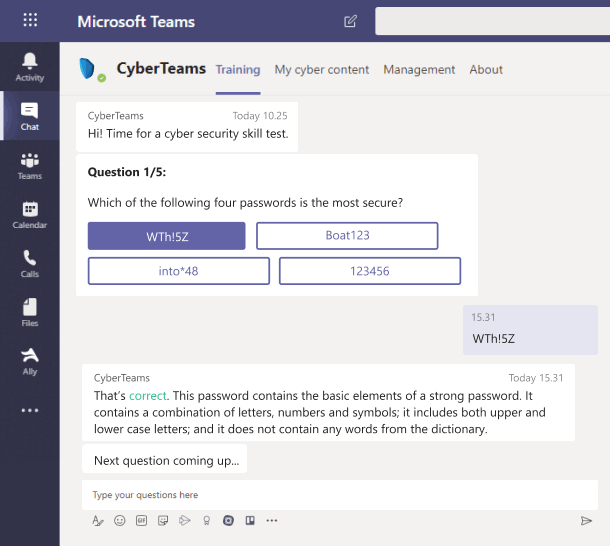 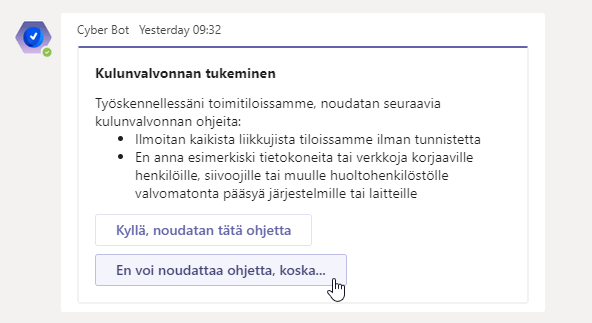 Target guidelines to most relevant units and employees. You get recommendations by selected frameworks and can also add your own if needed.

Employees connect to CyberDay via our MS Teams app or browser extension. This way our bot can deliver and train the selected guidelines for them.

CyberDay contains smart templates e.g. for  data system, personal data and cyber riskdocumentation. You don't need to write or draw, you can just click arond and link information, when automatic reporting is enabled. 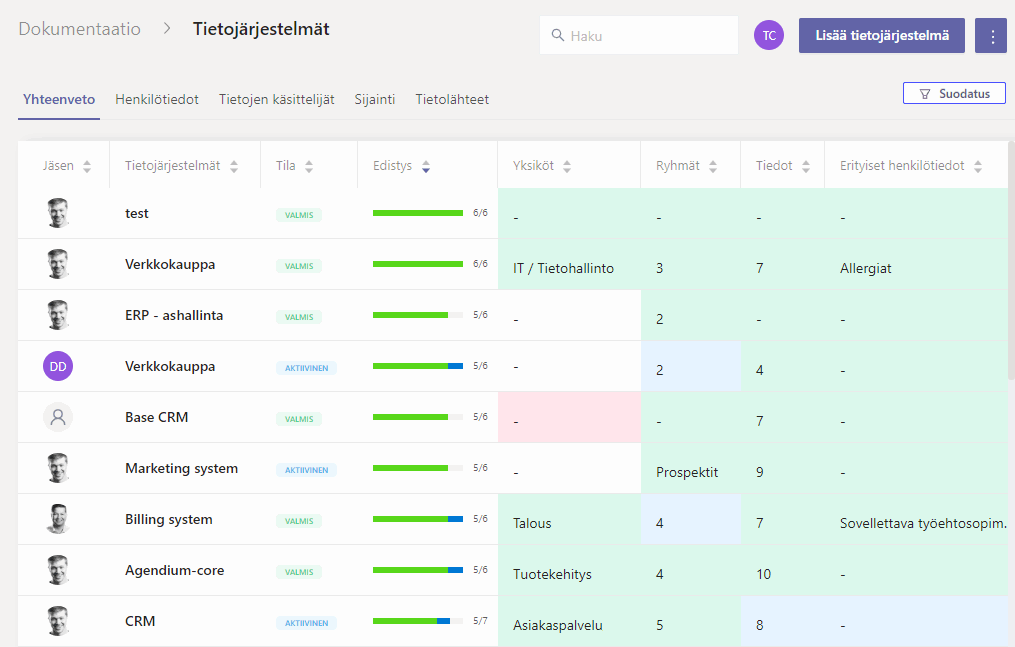 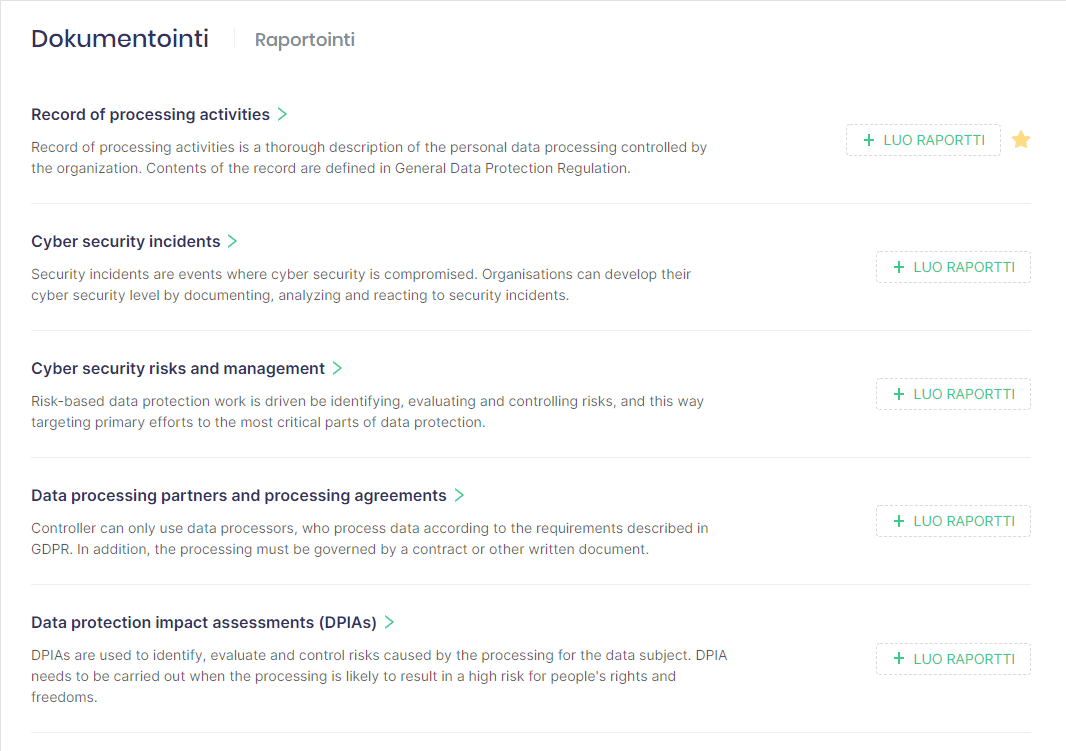 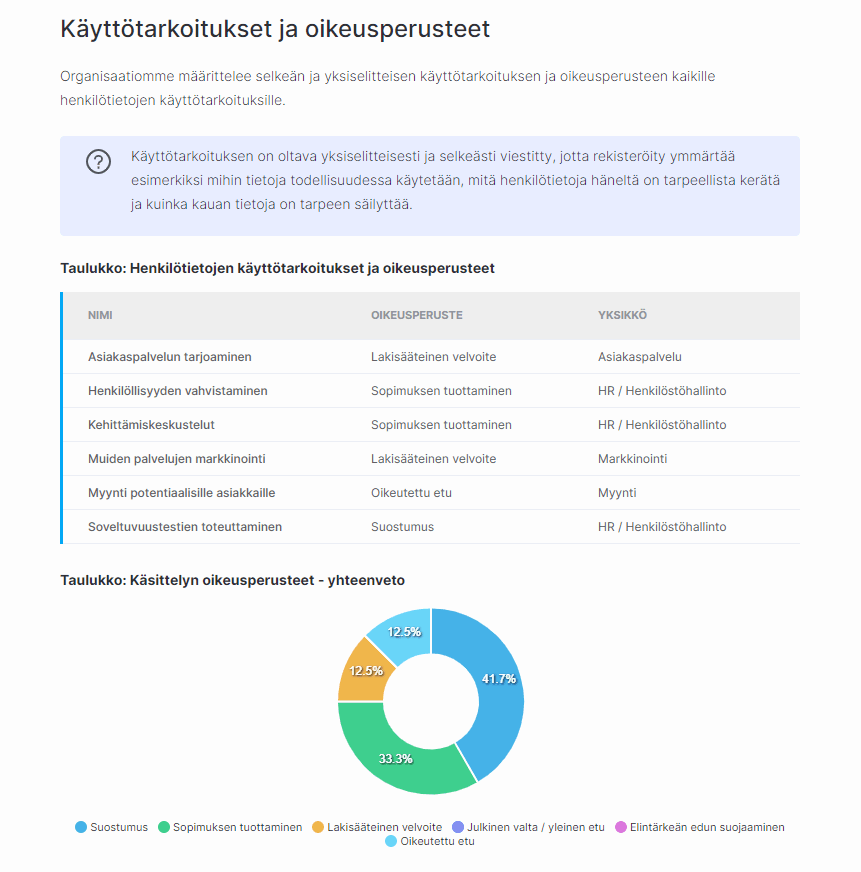 Demonstrate you act according to requirements

CyberDay includes a report library, which we are continuously reinforcing. No matter if it's own management, an authority, auditor or a customer, you have the necessary reports available and can compile them with a single click.

Most phishing victims experience a fraudulent transaction around 5 days after getting phished, new research shows.

An Alarming Number of Software Teams Are Missing Cybersecurity Expertise

Company shuts down because of ransomware, leaves 300 without jobs just before holidays

Employees of Sherwood-based telemarketing firm The Heritage Company were notified of the decision just days before Christmas, via a letter sent by the company's CEO. &quot;Unfortunately, approximately two months ago our Heritage servers were attacked by malicious software that basically 'held us hostage for ransom' and we were forced to pay the crooks to get the 'key' just to get our systems back up and running,&quot; wrote Sandra Franecke, the company's CEO, in the letter sent to employees. As a result of the botched ransomware recovery process, the company's leadership decided to suspend all services, leaving more than 300 employees without jobs. Local news outlet KATV reported last month that dozens of employees already filed for unemployment with local authorities even before the Christmas holiday, with many not expecting the company to survive. The same KATV reported that when employees called the company yesterday, they were greeted by a recorded message informing them that recovery efforts have not been successful and that users should seek new jobs.

Attackers demanded $6 million from the wire and cable manufacturer when they launched a December ransomware campaign.